Effective 24 June 2013, Suntec Real Estate Investment Trust, will join the reserve list of the Straits Times Index. This is after a quarterly review done to the STI.

The companies above will replace any current STI constituent that becomes ineligible as a result of corporate actions prior to the next review.

In the last post, we looked at a book entitled “See’s Famous Old Time Candies”. In this post, we will look at what Warren Buffett saw in See’s Candies that made him buy the company lock, stock, and barrel back in 1972.

In the preface of the book, Warren Buffett wrote that, “We discovered that we had purchased a company that held itself to a high standard of business ethics – product quality, service integrity, and the right sort of relationships with employees and suppliers. See’s Candies became our model for investment in other quality companies.”. The reasons behind See’s sustained success include its people and its products. He quipped that, “No one has matched our product, and our people are devoted to the proposition that no one will ever match our service, either”.

See’s is very stringent when it comes to quality. The Quality Assurance team runs lots of lab tests, checking for food safety and doing sensory analysis. The team checks for any microbiological growth and purity of its chocolates as well.

It doesn’t compromise on its quality even during crunch times. There was once in 1941 when butter, sugar and cream were in short supply in US. Instead of cutting down on the amount of ingredients used in each chocolate, See’s continued using the best ingredients, but made lesser candies. Each shop had a quota to sell and when they ran out of candies, they closed the shops for the day. This was a win-win situation. There was a scarcity effect created around the candies and long lines formed outside its shops. It lived by its motto: Quality Without Compromise. It’s continuing to do so too.

See’s Candies is also innovative. It sells over 150 different varieties of chocolates that one will be spoilt for choice. For Father’s Day, it creates unique gifts for dads. There was once a chocolate hammer and chocolate tie made for Father’s Day. And the tradition is continuing…

Management wise, Charles Huggins, President and CEO of See’s Candies has been touted by Buffett as someone who “combines discipline of a fine analytical mind with intuitive marketing savvy and a moral sensibility that is rare in the 21st century. In short, I wish we could clone him”.

Branding wise, See’s Candies still uses Mary See’s photos in its stores and on its chocolate boxes. Mary See was the mother of Charles See, the man who founded See’s Candies. Furthermore, there was a special edition Barbie Doll created for 2001 Berkshire Hathaway Annual General Meeting and its stores still use the iconic black-and-white floor tiles.

Even with competition from other chocolate manufacturers like Cadbury, Mars, Ferrero, etc, See’s Candies is still flying its flag high!

I was lucky to have chanced upon this book when I was searching for another book in the National Library. This is a book written by Margaret Moos Pick. This book touches on the history of the famous See’s Candies, the quality culture in the company and many other fun facts.

The book was so interesting that I read it in one sitting. The whole book is in colour and it is filled up pages and pages of photos of chocolates. It was so enticing. I took some photos of the book as shown below: 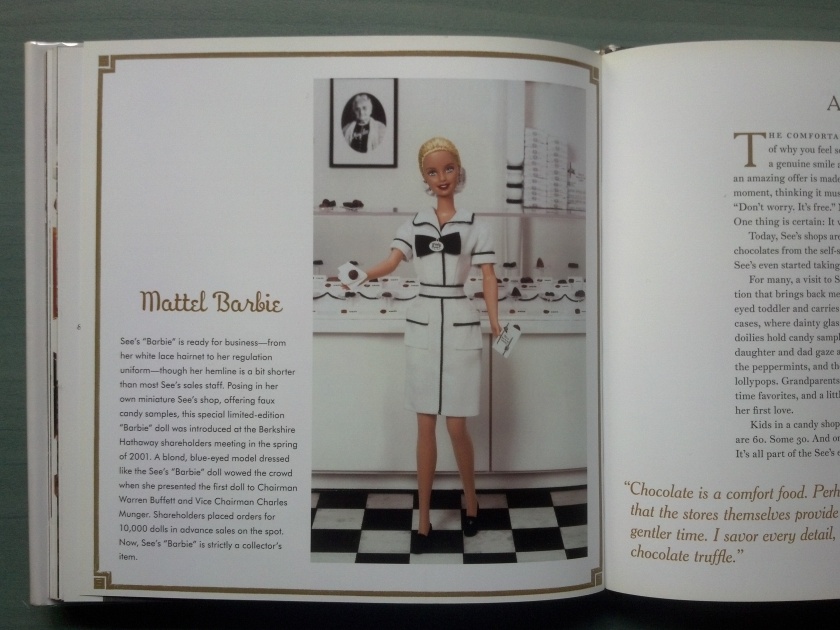 After reading the book, I was craving for some See’s Candies. I went to their official website and saw that they post to Singapore with a shipping fee of US$25. I’m so going to order them!

Myanmar has been the talk of the town recently due to it opening up. Listed companies such as Yoma Strategic, Super Group, Yongnam and Interra Resources that deal with Myanmar have seen their share prices shoot up. Myanmar may be the next growth story in the ASEAN region but ASEAN as a whole still has lots of room to grow.

I was at an event this morning and an analyst from Maybank-Kim Eng shared his views about ASEAN, the growth potential and the companies that deal with some of the countries in the ASEAN region. The photos of the slides below are self-explanatory (apologies for some of the blurry photos):